SilvarisCompanyArticlesLumberWhy Lumber Prices are down 74% since May 2021

While inflation in America is approaching a staggering 6% per annum, it's shocking to see prices on anything dropping by as much as 74%. That is exactly what has happened to lumber prices in recent months.

With inflation seemingly driving prices up in the U.S., it makes people wonder what could possibly cause lumber prices to drop so much. In the next sections, we are going to attempt to answer this perplexing question.

The Influence of Do-it-yourselfers

There tends to be a big misconception about the U.S. lumber market. A lot of people believe the market and subsequent prices are driven by large homebuilders and independent contractors. The reality is quite different. You see, large homebuilders and contractors usually have large contracts with wholesale lumber yards. They have to proceed in this manner because of budget concerns. It's not likely that any true volume home builder is going to get their lumber supplies from Home Depot.

The reality is the retail lumber market is largely driven by the do-it-yourselfers. These are people who decide to save on labor costs by doing their own home construction projects. Indeed, these are the people who will make treks to their favorite hardware stores to get their lumber supplies.

According to experts, the bottom falling out of lumber prices has occurred for a very basic economic reason, prices got too high, as high as $1,700 earlier this year. When prices get too high, demand dries up. In the COVID era when people have had less money to spend on home improvement projects, do-it-yourselfers have become more frugal. When lumber prices got too high, a large percentage of them collectively decided to put their home improvement projects on hold. 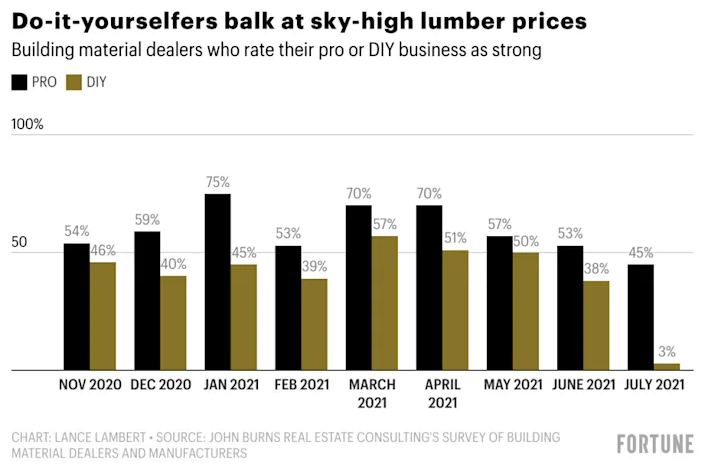 That is not to say that the major homebuilders haven't had some influence on dropping lumber prices. They too have felt the pinch of COVID, having to delay projects due to employment lockdowns. This also accounts for housing prices going up as demand stayed high but supply started to shrink.

In summary, do-it-yourselfers went to the sidelines in the middle of 2021. With lumber inventories sitting close to all-time highs, something had to give, and that was lumber prices.

The Immediate Future for the Lumber Market

There is a really good chance that what has transpired in the lumber market over the last 14 weeks is temporary. Why is it we feel emboldened to make that kind of comment?

First, do-it-yourselfers have made clear that they still intend to carry forth with their home improvement projects in the future. In fact, a recent survey from Expertise.com gave indications that 65% of the do-it-yourselfers who had previously said they were on the sideline stated they were ready to resume their projects. Their motivation for doing so is ironically low lumber prices. They are starting to sense that now is the right time for the building of new projects before lumber prices start to rise again.

According to Dustin Jalbert, a senior economist at Fastmarkets RISI,

"It’s definitely possible that a return of DIYers to the market contributes to a bounce in prices. At a minimum, it should help firm the cash market, which has continued to trickle down in recent weeks.”

It really is basic economics.

Second, there are several other things going on in North America that will eventually cause lumber prices to start rising. Here are four recent news stories that figure to have a positive impact on lumber prices in the near future.

1. A particularly bad wildfire season in British Columbia caused the temporary closing of many local sawmills. These closures had a definite impact on lumber inventories for major lumber companies.

2. Rampant wildfires in California will also end up causing lumber prices to increase for a very different reason. Thousands of homes will eventually need rebuilding. In fact, the number could end up being tens of thousands of homes. With lumber supplies already limited, there will be upward pressure on prices perhaps by later this year.

3. In southern parts of the U.S., the hurricane season has taken quite a toll on healthy Southern yellow pine trees. Again, lower inventories will eventually lead to rising lumber prices.

4. As the U.S. government goes in search of tax revenue to cover proposed infrastructure deals, the Feds are looking to raise taxes everywhere they possibly can. By all indications, the U.S. government is looking at increasing Canadian lumber duties this year from 9% to 18%. That's a whopping 100% tax increase, something lumber suppliers will need to pass onto consumers in the form of higher lumber prices.

As you can see, there is plenty going on in the lumber market. While prices are down 74%, it hasn't caused much panic other than in the futures market. In fact, it has opened the door to major homebuilders securing higher margins, which is good for the U.S. homebuilding industry. Also, the prudent and timely do-it-yourselfers might use this as an opportunity to take on more improvement projects than they had originally intended.

Jalbert expressed his optimism when he stated, "I think there will be a pretty good bounce from current levels in the cash market [this fall]. Not quite double though. But [it’s] hard to say how high it will go.”

The impact of the rollercoaster pricing of lumber over the last year is giving analysts headaches. Understandably, it is making it difficult for them to make meaningful predictions about the future.

The aforementioned news stories certainly give some indication of where prices are likely to go. However, there are too many economic issues hanging about that will impact lumber prices to some extent.

First, inflation is on the rise in the U.S. With the Biden administration looking to increase spending, there is little doubt that inflation is going to get worse before it gets better. It's been a long time since inflation has affected the economy. It's very difficult to anticipate how that is going to impact spending in America. With a recession possible, the housing and home improvement industries could be adversely impacted.

Second, taxes are going up as well. That will have a negative impact on all Americans who will need to realign their spending habits.

Finally, general economic unrest throughout all of the world is keeping people on the sidelines when it comes to spending. People feel they are losing control. If their bank accounts are all they feel they have control over, the spending will give way to saving. That means no unnecessary spending until inflation is under control and the impact of higher taxes becomes a known quantity.

In the meantime, we can look for lumber prices to increase some this fall. By the end of the year, the picture on lumber prices starts to get a little murky.

For more information on the current market conditions of both OSB and Plywood read:

Get Your Edge In The Lumber Market and Stay Competitive

Let us be your edge in this ever-changing competitive market.

We dig deep to find the deals you need to help your business grow. We provide these deals in two ways for you to access. Our Web Specials are posted regularly here on our website. Our QuickBuys 2.0 offers email notifications and soon, an app for you to get in on the offers as they are announced.

See What You’ve Been Missing Here