It was only a little more than 10 months ago that the price of lumber hit an all-time high of $1,686 per board foot. Conversely, the construction industry then watched the price of lumber fall all the way down to $454 per board foot by mid-September. That's an incredible drop of 73% in just 4 months. It's fair to say the rollercoaster ride that resulted from these fast price changes created a kind of volatility the lumber marker had not yet seen.

On March 3, 2022, the price of lumber had rebounded in a dramatic fashion, reaching $1,441 per board foot on the way to a new potential top. It's been a move that fairly represents the kind of volatility market forces have been dealing with since the first few months of the COVID19 pandemic.

With this kind of volatility, it's difficult to predict where lumber prices may be headed in the next 6 months to a year. However, a look at the causes of this latest price increase could give us some clues as to where things may be headed. 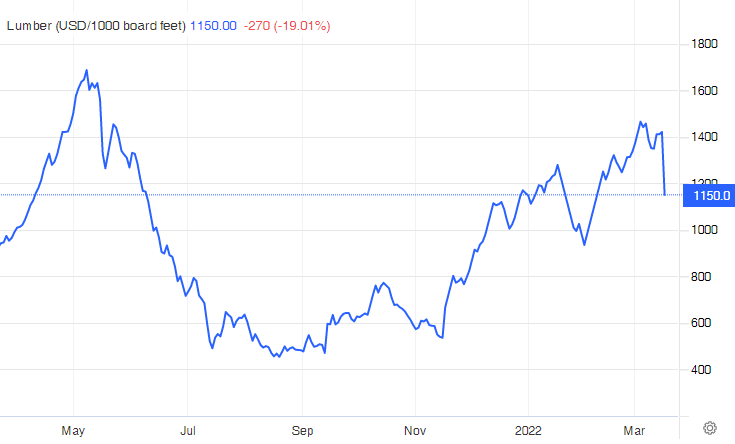 What is Currently Driving Lumber Prices

Since mid-November 2021, lumber prices have increased by 269%. There was some increase expected heading into the new year for seasonal reasons. However, no one expected such a dramatic change in price in such a short period.

Initially, analysts were using the usual suspects as a means of explaining the current increase. It was initially thought that housing demand in the U.S. coming out of the pandemic was likely a big reason for the increase in lumber prices. Yes, there was an increase in demand for new housing in states like Florida, Ohio, and Texas, but that was likely offset by lower demand in states like California and New York. The driver for these changes in demand has been correlated to a population shift as Americans have started fleeing radically liberal states that are struggling with liberal issues.

Given the offset mentioned above, housing demand offers only a small explanation for the current lumber price change. A more likely culprit would have to have something to do with supply shortages.

Setting housing demand aside, we have to dig a little deeper to find out what other forces have been playing havoc on lumber prices. In fact, there are three things going on in Canada that would certainly have something to do with current lumber shortages. Let's take a closer look at these three things.

Climate change proponents are always quick to shift blame for adverse weather conditions to environmental changes caused by pollution. Whether or not that's a fair assessment is an argument for another day. For now, it suffices to say that Canada has been experiencing a brutal winter over the past few months.

Most of the weather issues have been occurring in Western Canadian with British Columbia getting hit the hardest. Heavy rains and flooding in December and January left loggers on the sidelines as heavy machinery was rendered non-functional. After enduring almost three full months of such weather conditions, it's easy to see why supply disruptions occurred. While we are on the subject of supply chain disruptions, building materials were already getting delayed by significant supply chain issues caused by the pandemic and labor shortages throughout North America. This was further complicated in February when Canadian truckers took to Ottawa to protest the Canadian government's harsh COVID mandates. The total impact of those protests on the supply chain has likely just started to come into focus.

The combination of all of these supply chain issues has made it nearly impossible for lumber to get out of Canada into the U.S. where there is some demand.

For several decades, pine beetles have been playing havoc on Canadian forests. Since female mountain pine beetles like to lay their eggs underneath the bark of softwood trees, the population of pine beetles has been growing consistently since the mid-1990s. As their larvae eat away at Canadian pine trees, it leaves a lot of dead trees in their wake. According to the Canadian Forest Service, this infestation problem has caused the loss of more than 750 million cubic tons of pinewood over the years.

Under normal conditions, this kind of loss would generally be accepted as normal. However, the compounding effect of this issue in combination with supply chain issues has now brought the pine beetle infestation issue into focus as an area of ongoing concern.

With the current administration spending trillions of dollars over budget in the U.S., the Congressional Democrats have been hitting industry after industry with tariff increases on imports. The Canadian lumber industry has not been able to avoid the fallout of these higher tariffs.

On November 24, 2021, the U.S. Commerce Department announced an increase in tariffs on imports of Canadian softwood producers to 17.99 percent. That is more than double the rates that were in place under the previous administration. One sure way to create volatility in any industry is to increase taxes and tariffs.

Of course, both the Canadian lumber industry and U.S. construction industry have been none too pleased with these increases. As was expected, Canadian lumber yards were forced to raise their prices to offset the impact of these tariffs on their profit margins. That has certainly resulted in higher lumber prices in the U.S., which is also contributing to an explosion in housing prices. It's like throwing a match on an inflation fire that has already been burning out of control.

According to Chuck Fowke, chairman of the National Association of Home Builders, “This decision undermines the historic funding commitment made to housing in the Build Back Better legislation and erodes efforts by Commerce Secretary Raimondo and other Biden administration officials to tackle the lumber and building materials supply issues plaguing the industry.”

While the Canadian lumber industry has been adversely affected by this tariff increase, the U.S. lumber industry has certainly been deriving benefits. At current prices, American lumber producers are now seeing a playing field that is more level than it has been in decades. Some guys win and some guys lose.

A look Into the Immediate Future of Lumber Prices

Considering the three issues listed above, it's very likely that lumber prices will not be leveling off any time soon. It is very possible that upward pricing pressure could see lumber prices challenge that May 2021 high in the next month or two.

As inflation in the U.S. continues to sit at its highest levels in 40 years, the current administration is very likely to continue its battle against inflation by trying to raise more tax/tariff revenue. With that in mind, it's not out of the realm of possibility that Canadian lumber producers might see yet another increase in tariffs.

As the future of lumber prices hang in the balance, there is a new issue that could end up impacting economies all over the world in the coming months. Indeed, Vladimir Putin's decision to invade Ukraine has the world's attention right now.

To their credit, the Ukrainians are putting up a dandy fight. It's something that has clearly caught Putin off-guard based on his predictions his army could just march in and take what they want. It's is not going as planned as the war rages into its fourth week. That is making Putin more unpredictable than ever.

While the U.S. remains at an arms-length in the Ukraine conflict, Putin's threat of using nuclear weapons has the Biden administration on high alert. If things were to escalate in Ukraine to include NATO troops, America's already out-of-control inflation would get hit with accelerating gas. Also, the need to move war supplies and weapons across the world from both Canada and the U.S. would put further pressure on a supply chain that is already overwhelmed.

For certain, the world is in a state of turmoil. There is a new "Deltachron" COVID variant on the horizon. World economies are unstable at best. The threat of nuclear war has never been higher. Inflation in the U.S. has the current administration trying to tax everything in sight. Weather patterns continue to be unpredictable from one month to the next. All of these issues and more have the potential of driving lumber prices much higher in the immediate future.

Is it possible we could see lumber prices getting close to that $2,000 per board foot threshold? While it might have been unthinkable prior to the COVID19 pandemic, the world has learned that anything is possible. To hit that $2,000 threshold, prices would only need to rise another 30% from current levels. There is every reason to believe that is possible given the current market environment.

Is there anything that could be done to cool lumber prices off in the very near future? More than a few North American economists would like to see the current administration loosen its reigns on the U.S. gas and oil industry. If they could drive record gas prices down, it might result in a slowing of the inflation train that is crippling the U.S. economy. That would also give the U.S. government's Department of Transportation a chance to get North America's supply chain issues under control.

Get Your Edge In The Building Materials Market and Stay Competitive

Let us be your edge in this ever-changing competitive market.

We dig deep to find the deals you need to help your business grow. We provide these deals in two ways for you to access. Our Web Specials are posted regularly here on our website. Our QuickBuys 2.0 offers email notifications and soon, an app for you to get in on the offers as they are announced.

See What You’ve Been Missing Here

What The Lumber Bubble Pop Means For The Rest of 2021